We've been custom mask and costume makers for over 25 years.


22nd May 2015
The Steampunk 'piggyback' costume we made is finished! Alex and the costume are now performing around Europe. To book him at your event, contact: Alex Helmers.

15th May 2015
We are making a 'piggy back' costume for Alex Helmers Entertainment, and this is the final fitting. It's great fun to work on but, oh boy, a real technical challenge! First you need to sculpt the body, arms and legs, then create unique patterns for all the oddly shaped clothing. Luckily, Alex is super nice to work with, and 'works' the costume to good effect. Steampunk accessories, wig, and top hat will finish him off nicely. Check out the back view - cute eh?! We're looking forward to seeing it in action!

6th May 2015
Elizabeth and Guy Pelly wear our unicorn and horse heads to a glittering party in New York. Photos appear in Vogue, The New York Post and the Wall Street Journal! Photo © Hannah Thomson for American Vogue. 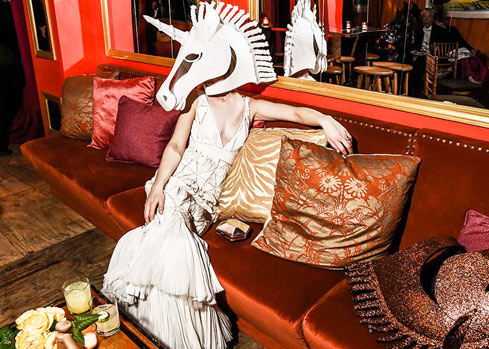 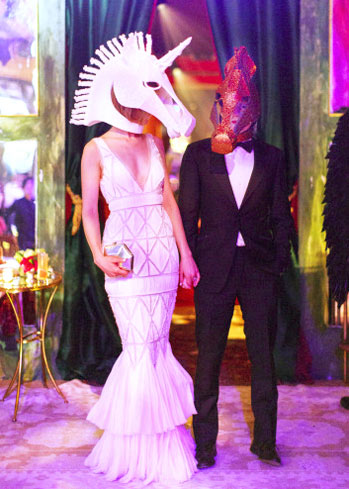 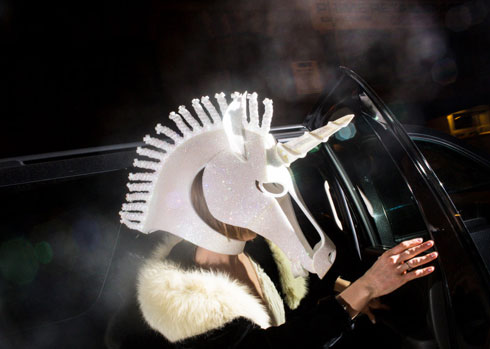 4th May 2015
We travelled down to South Nederland, on the German Border today, to deliver the 'Wishing Tree' we made to commemorate the 70th Anniversary of the liberation of the Netherlands at the Dutch Liberation Museum (National Bevrijdingsmuseum 1944-45). The tree soon filled up with maple leaves, commemorating fallen Canadian servicemen and women. 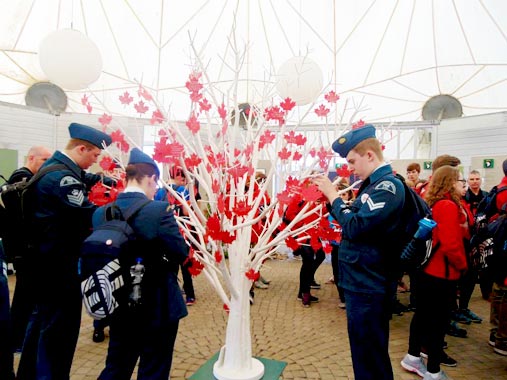 The wishing tree takes shape in our workshop, with absolutely no help from Dino the dog. Dino took great delight in slyly nicking branches every time our back was turned and gnawing on them like crazy. And then he'd give us a sweet little "Who, me?" innocent look, while standing over a pile of soggy wood pulp covered in dog spit...Mmm, so loveable! 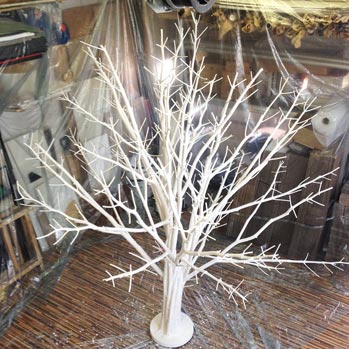 18th April 2015
We've just completed this floating sculpture maquette for a major European property developer. The life-sized version of the sculpture is sure to bring tranquility to the foyers of their letting apartments in Berlin, London etc. This follows on from the mad orange spacesuit we created for them a couple of months back! 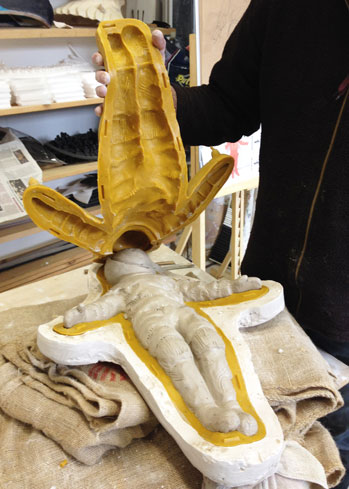 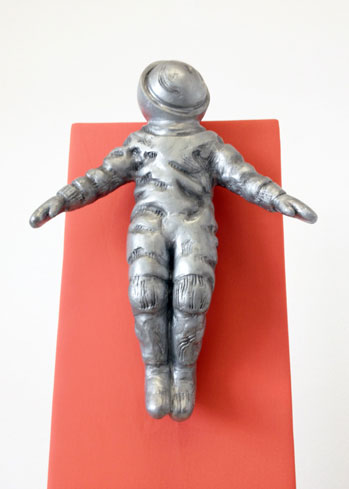 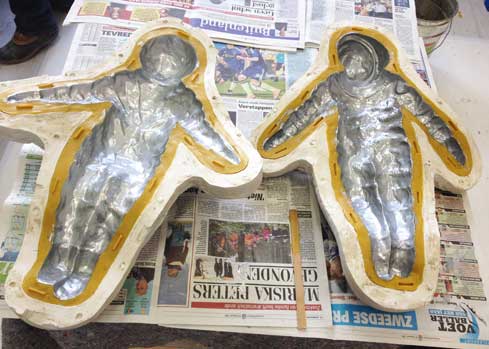 25th March 2015
Some of the many costumes we've created for London Zoo, these are "The Butterfly Lifecycle". 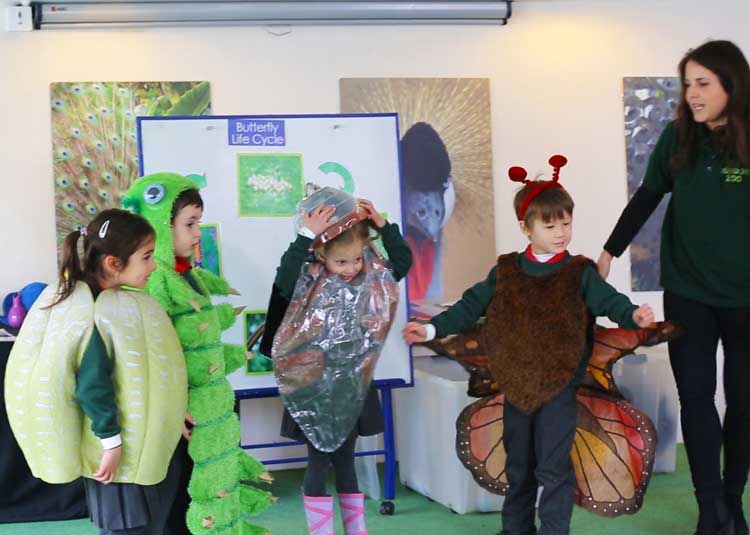 14th March 2015
They're not real pencils! they're pieces of dowel we sharpened and painted to look like pencils. Each spike of the giant hedgehog we created is designed to be removable and have a note spiked onto it during team-building events.

12th March 2015
Large eagle wings we created for the Falconry Department at the Zoo 'd Amneville, in France. When taking the photos we got a spontaneous chorus of "I Believe I Can Fly" sung to us by some passing teenagers on bikes! 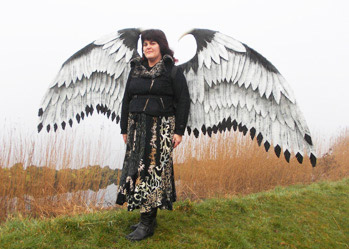 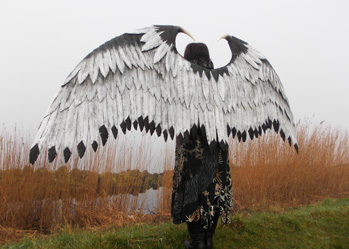 11th February 2015
The very purple frog we've been making is finished, and has hopped off to his new home at Purple Frog Systems! 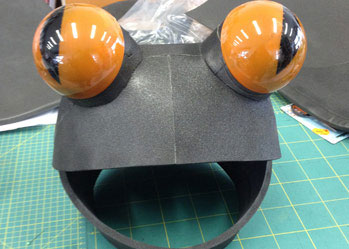 5th February 2015
It's been in the pipeline for ages, but last week we opened our 'TentacleStudio' shop on Etsy, the international website that promotes handmade goods by independent, creative makers. And we've just heard our first Etsy customer's order has already arrived in New York. Hurrah for the internet!

29th January 2015
Canna Flower costume we created to be worn by an exhibitor at IPM Essen, the world's biggest flower and green sector show. The client loves her!

23nd January 2015
Normally January is the quietest month for us; party animal customers have gone into their caves for a lie down, and corporate clients aren't launching new products. So we get to tidy up the post-Christmas glitter and paint-strewn bombsite of our studio, and put the taxman's paperwork in order in a relatively civilized way.
But this year it just hasn't let up! Maybe it's our 'new look' website (upgraded a couple of weeks ago) or maybe the world is thinking "Never mind the recession, let's just do it!" But whatever the reason, we're pleased that our work seems to be more in demand than ever.

Large character head of the Dutch Cabinet Minister Stef Blok, the first in a series we have been commissioned to make for a political pressure group to use during nationwide rallies and protest marches. 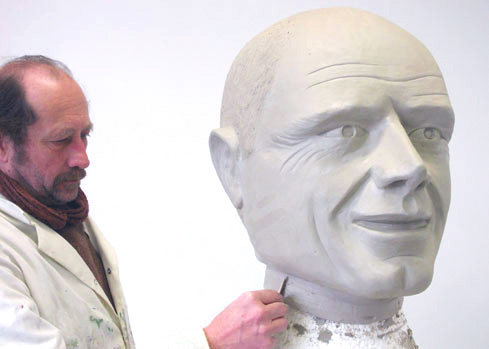 10th January 2015
2015 has been a busy year so far! We kicked off the new year by re-vampting this website, changing the format, adding new new work and bigger, better photos. Hopefully (!) the site is now a bit simpler and easier to navigate around.

22nd December 2014
Thanks to Ty Atkins for these photos of our animal masks, taken in Dallas, just before they went on stage for "The Birth of the Promise" Christmas Musical at Potter's House. Ty says the show was amazing! Happy customers, Happy Christmas! 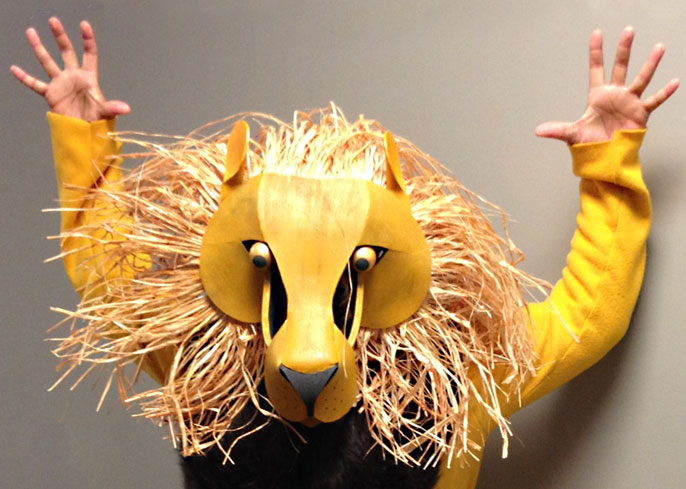 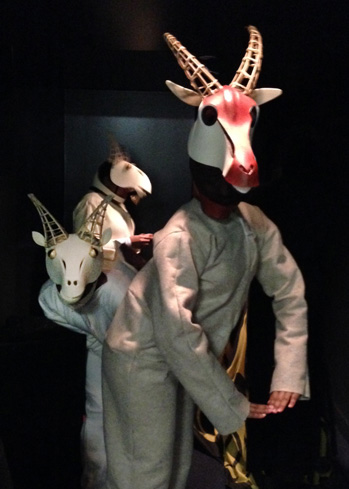 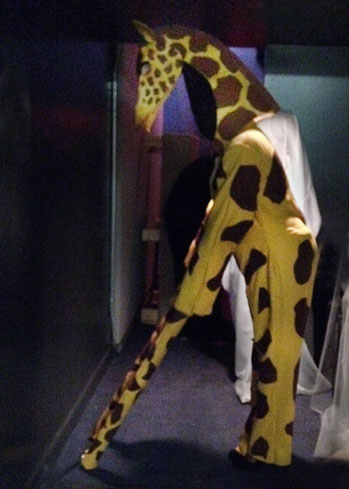 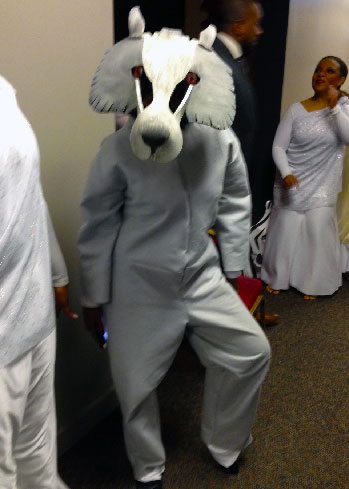 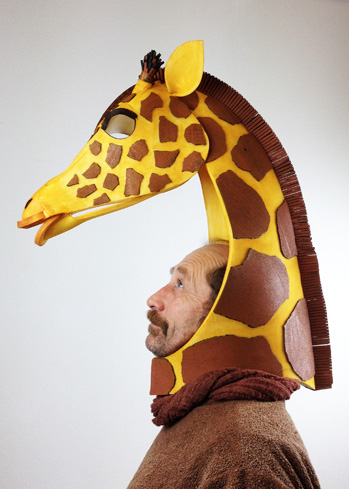 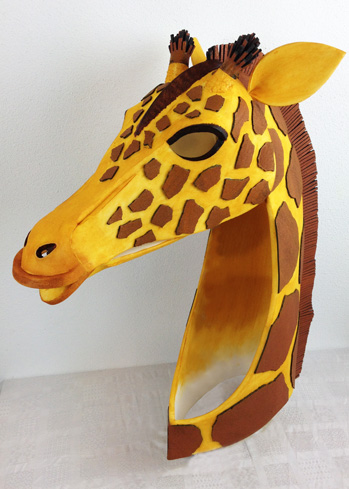 11th December 2014
Ooh, it's been a busy month, no time for typing! Despite the coughs and sneezes we've battled through to get everything despatched in good time. All pre-Christmas orders are done (phew!), and currently we are working on various performance projects, including a big batch of animal masks for Dallas, USA. Some photos of the beasts in progress... 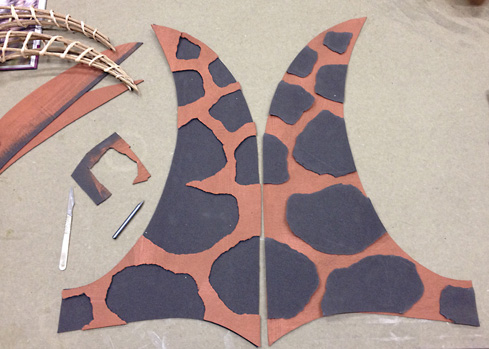 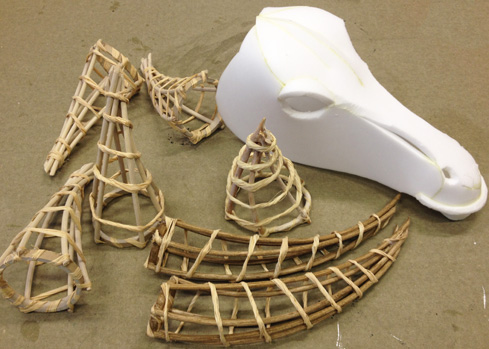